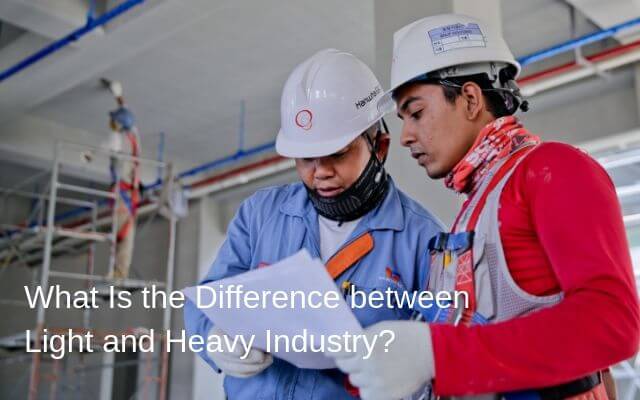 In the field of manufacturing, the distinction between light and heavy industries is easily identified. However, for those who are unfamiliar with these terms, it’s easy to confuse them with one another.

To understand the contrast of these two industries better, let’s first define each of them.

Light industry covers manufacturing businesses that are usually less capital-income intensive. Most light industry products are produced for end users rather than as intermediates for use of other industries. Their facilities normally have less environmental impact than those associated with heavy industry. For that very reason, zoning laws are more likely to permit light industry near residential areas.

In general, light industries require fewer raw materials, space and power. A light industry uses small amounts of light raw materials to produce light goods e.g. computers or mobile phones. Light industries usually include electronics and assembly industries, and it’s good for them to be near research facilities, in a clustered group, or near high class transport like motorways and railways.

Light industries are usually located in business parks, industrial estates, investment parks, and of course, science parks. They include sectors of the food industry, paper making, plastic, leather, textiles, and household electric appliances. Although, they usually cause little pollution, particularly compared with heavy industry, some light industries can cause significant pollution or risk of contamination, so they have to be monitored regularly.

With regard to heavy industry, they essentially involve large and heavy products, large and heavy equipment and facilities (such as large machine tools, huge buildings, and large-scale infrastructure), or complex or numerous processes.

They are usually the industries that often sell their products to other industries rather than to end users and consumers. In other words, they usually make products that are used to make other products. They are very capital-intensive, meaning they require a lot of machinery and equipment to produce, and they are often more heavily cyclical in investment and employment.

Sometime heavy industry is also a special designation in local zoning laws. For example, the zoning restrictions for landfills usually take into account the heavy truck traffic that will exert expensive wear on the roads leading to the landfill.